In the larger towns there are shopping malls with a range of European goods. In contrast to the surrounding countries, the goods are mostly from Portugal and therefore more southern European than German. In the countryside you can buy fantastic local fresh products on the markets. Along the big streets the local goods which are sold are really very fresh.

Since it has little to no campsites, it is often not so easy to get good drinking water. The water you get is often not drinking quality and must therefore be filtered carefully. 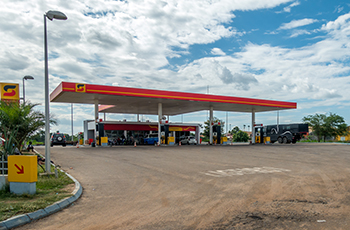 The filling station network is very dense, often newly created and the stations look very good. Unfortunately, often no diesel is available and the distribution could then be difficult. It is advisable to refuel whenever possible and to carry as much as possible with you. The quality though is often not suitable for modern engines. The sulfur content is so high that it is not even further specified; we estimate about 5’000ppm.

The currency, Kwanza, AOA, is not traded freely. The official, government-fixed exchange rate (1CHF = 174AOA) is obviously not very realistic, which is why a brisk black market trade (1USD = 400AOA) exists. We are not sure if the street trade is allowed or not, but it is certainly tolerated. The money exchange does not take place in dark alleys and backyards, but in large, public places. ATMs you can find in larger towns, of course with the official exchange rate. We never used our credit cards because of the poor official exchange rate.

Angola is an Eldorado for free camping. You can stay almost everywhere. The country is not so densely populated, hence you don’t have to always stand in a village. We found tremendously beautiful places, where we absolutely stood sometimes longer (see IOverlander). We found two campsites, whereas the one in Namibe is more like a garbage dump than a campsite.

As in most countries, we bought a prepaid SIM card with data on the border. The price was very cheap compared to Namibia (25’000AOA for 20GB at Unitel). The coverage in the country is very appealing, slightly worse though along the southern coast.

Apparently, the entire infrastructure of the country is recreated simultaneously by China. We were told that the Chinese have secured for this work very cheap oil in return. We have seen a lot of new, beautiful train stations, all looking exactly the same and all standing completely lost and unused in the landscape. The main arterial roads are actually not fit for traffice; they are over hundreds of kilometers just construction sites. We were only able to drive about ten kilometers on new (about four months old) tarred roads, but the execution was so shabby that it already had Potholes again. However, the old side roads, apparently created by other construction companies, are often in perfect condition, both as dirt roads and as tarred roads. The maps sometimes did not correspond to the facts, roads on the map did not exist and real roads were not listed on the map. We had maps from three different vendors and we could not get rid of the feeling that they had written off each other’s mistakes.

We never got a note neither at the border nor at the police controls that anything on our vehicle did not comply with local regulations.

Currently it is a bit complicated to get a visa for Angola. In principle, the visa can only be applied for in the home country. However, there are European travelers who told us that they had also obtained a visa in Windhoek. Official authorities, however, call this impossible. The process is very complicated and lengthy, see the corresponding Angola website. To make matters worse, the visa starts to run with day of the issue of the visa. In our case it was a bit difficult because we did not reach Angola until the visa expired already. However, the Ambassador in Switzerland personally supported our case so that we could use the visa even though it had already expired. However, this practice might be adapted in the near future. Angola does not accept the Carnet de passage as the only African country we have traveled through so far. This means that the vehicle has to undergo an extremely complicated process with many forms and pictures. We needed about 5 hours to enter Santa Clara.Visa cost for 2 persons: 240 CHFTrafficker: 5,000 AOAPhotocopies: 80 NADRoadtax Globi: 300 NADRoadtax Ernstli: 158.5 NADFurther fees were not charged at customs. All fees are to be paid in cash.

The numbers are based on an exchange rate on the road.Daily expenses for 2 persons:

The country is still in the reconstruction phase after the war. As everywhere in Africa, there are many Chinese companies operating in Angola. Tourism is not developed at all, which we really liked. However, the potential would be enormous. Many cities we have seen are completely dilapidated. We had the impression that nothing is working here anymore. This is a pity, because some of the cities were obviously very beautiful at the time.